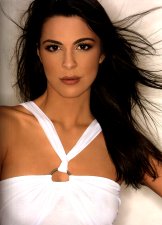 While in college at Cornell University, Cara's life took an unexpected turn when she won a modeling contest hosted by Guess? and Bloomingdale's. The prize package included an introduction to a modeling agency and a test shoot to begin her portfolio. Following graduation, she decided to pursue modeling full time.

Since then, Cara's work has appeared in the pages of numerous magazines such as Allure, InStyle, Hamptons, Maxim, Manhattan Bride, and W Magazine. She has been featured in notable advertising campaigns for, among others, Perlina handbags, Leslie Greene Jewelry, Conair, Cohen's Optical, Burlington Coat Factory, scünci, and QVC. She has also graced the covers of many magazines and over 75 romance novels.

She has appeared in fashion segments for Weekend Today and Good Morning America and periodically hosts trend and lifestyle segments on local TV stations across the United States.

Cara has also expanded her business to include fit modeling and consulting. Her technical knowledge of garment making and aesthetic eye for the right fit has made her one of the most sought after and versatile fit consultants working today. Her clients include several Fortune 500 companies.